Posted on October 23, 2012 by Sifu Dale Guadagna Leave a comment 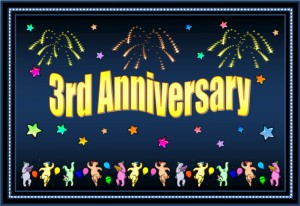 Three years ago on October 19, 2010, I held my first class as Huntersville Tai Chi Center (I changed the name, at the urging of my teacher Master Eric Sbarge, to Lake Norman Tai Chi Center several months later to be more regional).

My first class was held at my first student’s home. We held classes there for 3 months before moving to The Fitness Center at Birkdale in Huntersville, NC.

The Number Three has a few interesting properties:

In Mandarin Chinese, the number 3 sounds similar to the character for birth, and is considered a lucky number.

In Chinese Martial Arts, repeated patterns in a form are usually repeated 3 times. The belief is, if you can do it 3 times, you can do it many times.

Three is a trinity. There are many trinities in Chinese culture, Martial Arts, and in nature:

That Tao te Ching states: “… from three comes everything.”

The trigrams of the PaKua are sets of three lines that are either broken or unbroken representing yin and yang.

As you can see, the number 3 is highly regarded in Chinese culture. Did I miss any references? Let me know in the comments below.

I look forward to our auspicious third year, and many, many, more.

Dale Guadagna began his Tai Chi journey in 1998. Encountering job-related stress, he joined The Peaceful Dragon to help manage his chronic stress. Seeing how the Chinese Arts of Tai Chi, Qigong, Yoga, and Meditation has helped countless students, including himself, he has devoted his life to teaching these arts. In 2009, with his wife Maricris, they opened Lake Norman Tai Chi Center to serve North Mecklenburg, Iredell, and Cabarrus counties in North Carolina.
View all posts by Sifu Dale Guadagna →
Meditation, Qigong, Tai Chi, Yoga