Posted on September 25, 2012 by Sifu Dale Guadagna Leave a comment

Living In Balance Means Not Living In The Extreme 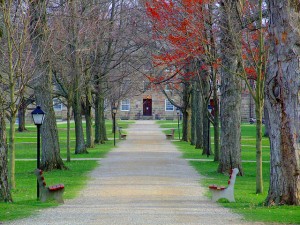 Are you too extreme to walk the middle path?
Source: flickr.com

Even our ideals have become extreme where each side takes up their position, as far from the middle as possible, and defends that position at all costs. We see in politics, religion, sports fandom, Mac vs. PC, Ford vs. Chevy, Coke vs. Pepsi, my blank is better than your blank, and on and on and on! OK, maybe that’s a little extreme, but I bet you’ve seen, or maybe even participated in some of these extreme discussions.

We can see this in the current U.S. Presidential elections (and in pretty much every political election). There’s the Democrats and the Republicans, and each side is firmly entrenched, ready for battle, behind their candidate, who can do (and has never done) any wrong. Whereas the other candidate is (and has always been) wrong. This creates an environment where everyone takes a side, and no one even bothers to work towards the middle (i.e., compromise), which is where the best solutions exist.

Tai Chi: The Middle Path As A Physical Exercise

Chan Buddhism talks of the “Middle Path,” or “Middle Way.” Taoism (Daoism) bases their entire philosophy on “The Way,” living according to nature, avoiding extremes. In our Tai Chi, we are taught to “walk” the middle path through our practice of the arts. We are taught not to be stiff, but also not to be slack. We want to be loose and relaxed, but also filled with energy and intention. A physical manifestation of an emotional action.

The Tai Chi symbol embodies this ideal. We have Yin, represented by the white section, and Yang, represented by the black. As you trace around the circle, you go from one extreme to the other and back again. The curved line between Yin and Yang is the middle path. 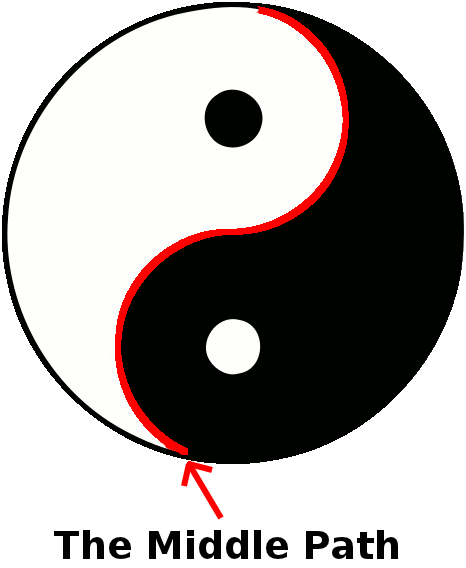 The Middle Path of Tai Chi

In nature we see extremes. Drought and monsoons, desert heat and arctic cold, even the transitions between seasons can see some extreme conditions. Nature shows us that the path between these extremes passes through a middle way … a compromise, if you will, between the two extremes. The path between Summer (extreme heat) and Winter (extreme cold) is Fall, where the weather is more temperate. Extremes have their use, it’s the attachment to these extremes that causes problems.

What do you do when you’re in an “extreme” discussion over, say Paleo vs. Atkins? Easy, step away from your extreme and see what the other side is seeing. Don’t be afraid of being swayed or converted. If your values won’t allow it, it won’t happen. The upside is that you might come to an understanding with your friend. Which, deep down, is what we all want anyway …  to be understood, at the very least, to be heard.

You might also find that there is common ground between the two positions and there are more similarities than differences. It’s all possible if we just get out of the way of our own extremes and not be judgmental of what is being said. Even if we’re the one’s saying it.

Dale Guadagna began his Tai Chi journey in 1998. Encountering job-related stress, he joined The Peaceful Dragon to help manage his chronic stress. Seeing how the Chinese Arts of Tai Chi, Qigong, Yoga, and Meditation has helped countless students, including himself, he has devoted his life to teaching these arts. In 2009, with his wife Maricris, they opened Lake Norman Tai Chi Center to serve North Mecklenburg, Iredell, and Cabarrus counties in North Carolina.
View all posts by Sifu Dale Guadagna →
Tai Chi Life Balance, Positive Spirit