Lake Norman Tai Chi Center is a lineage school. Many of the authentic martial arts taught at our school have passed directly from Great Grandmaster Ch'ang Dung Sheng to Grandmaster Ma, and from him to Master Eric Sbarge, and then to Sifu Dale F. Guadagna. 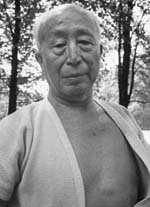 Great Grandmaster Ch'ang Dung Sheng was born in Hopei, China in 1905. While still a small boy, he began to study Shuai Chiao -- the Chinese art of grappling -- possibly the earliest martial art for which there are records. Many Shuai Chiao holds and throws are hidden in what Westerners know as Kung Fu.

In 1933, then only 18, Great Grandmaster Ch'ang became China's National Heavyweight, Shuai Chiao Champion even though he was not a heavyweight. Due to his tremendous power and expertise, this China national treasure remained undefeated in his lifetime.

Ch'ang learned T'ai Chi Chuan from General Li Chien Lin in the 1930s and because of his complete mastery of Shuai Chiao, was able to perfect the style called Ch'ang Shih T'ai Chi Chuan which incorporates the techniques of this ancient art of Shuai Chiao, and is unique among T'ai Chi styles for its combat potential. Ch'ang was also expert in the arts of Hsing-I, Pa-Kua and Shaolin Kung Fu. 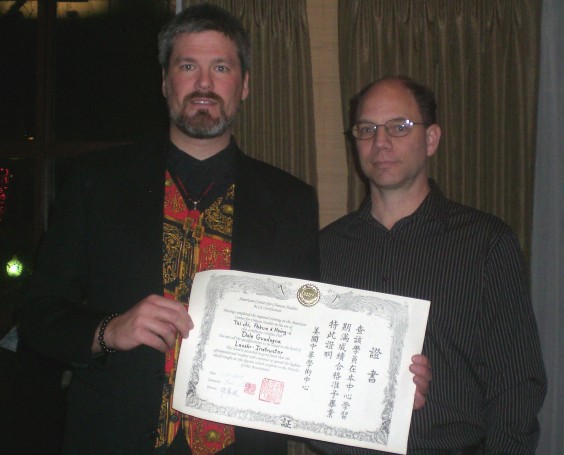 Master Eric Sbarge has trained for over 30 years in Tai Chi Ch'uan, Pa-Kua, Hsing-I, Shuai Chiao and Shaolin Kung Fu. Master Sbarge has extensive knowledge of the arts he teaches, and has taken firsts in the black belt divisions of a number of tournaments, among them the United Nations Open. He is also a member of the Martial Arts Hall of Fame.

Continuing in the footsteps of his own master, Master Sbarge, along with his wife, Hu Wan Chih, envisioned and brought into being The Peaceful Dragon Cultural Center. Master Sbarge teaches with the certification and sanction of the Kuo Shu Federation of the Republic of China, and the American Kenpo Association. He also taught tai chi at Central Piedmont Community College and kungfu at South Charlotte Middle School. 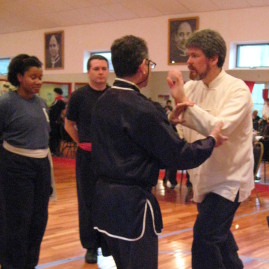 Sifu Dale Guadagna has trained for over 10 years in Tai Chi Ch'uan, Pa-Kua, Hsing-I, Chinese Yoga and Chan Meditation under Master Eric Sbarge, at the Hall of the Peaceful Dragon in Charlotte, North Carolina.

Sifu Dale has competed in many local tournaments taking the highest honors in the Tai Chi division. He continues his own training with his teacher and also attends seminars taught by some of the greatest Chinese Martial Arts Masters of today. He has dedicated his life to learning and teaching the traditional Chinese Martial Arts and brings his teachings to Lake Norman.

Sifu Dale teaches with the certification and sanction of the Kuo Shu Federation of the Republic of China.

While all schools and styles have valuable things to offer, we believe that the serious student prepared to make the commitment to this unique path of learning and development will find none better than Lake Norman Tai Chi Center.