Posted on October 6, 2012 by Sifu Dale Guadagna Leave a comment 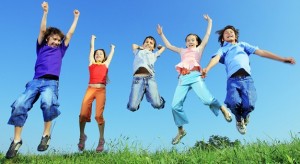 How much exercise do your children get?
Source: flickr.com

I have an eight year old daughter, and she doesn’t get much exercise. She does get recess every day at school, but she usually plays on the swings. She does have a phys ed class, but that’s only once every 6 school days.  It is a struggle to get to her to move, but I think I’ll pass on the latest kid fitness craze.

There is a dance school in British Columbia, Canada, that is offering Pole Dancing classes … for children!

At the risk of sounding like an old fuddy-duddy, when I was a kid, we spent our time outdoors running around collecting bugs, riding our bikes all over the neighborhood, playing in dirt … all-in-all just having a good time. I didn’t climb any trees, even though we had a huge tree in our backyard, there were no branches low enough to climb. Now that I think of it, that was probably done on purpose!

The state of our society now makes that difficult, so we tend to rely on organized fitness, such as soccer, martial arts, dance, and gymnastics. But, you know kids, they demand variety. They get tired of doing the same thing over and over (even though that’s good for their self-discipline), so parents are always looking to find new things for their kids to do.

I understand that Pole Dancing does build core strength and pole dancers are in exceptional shape. But, is it the best thing for kids to do? There is a stigma associated with pole dancing, and I don’t think we should be associating our kids with it.

I applaud the Dance School owners for trying something new, and I wish them well in their new endeavor. But, I don’t think it’s appropriate for my child, or any child really.

If you want your kids to embrace fitness, find something that they have an interest in, and help them to develop the self-discipline to stick with it. Maybe you should join them. Even us adults should get out and move more. If we don’t, we could end up with CrossFit for Kids. Oh darn, we’re too late!

Monkey Mind is an occasional special post that may, or may not, have to do with Martial Arts, Fitness, and Personal Development. It is always an opinion and you may not always agree. Which is awesome. I’d like to hear your take. Share it in the comments below, but remember the Golden Rule, and that I have the right and privilege to remove offending comments.
0
print

Dale Guadagna began his Tai Chi journey in 1998. Encountering job-related stress, he joined The Peaceful Dragon to help manage his chronic stress. Seeing how the Chinese Arts of Tai Chi, Qigong, Yoga, and Meditation has helped countless students, including himself, he has devoted his life to teaching these arts. In 2009, with his wife Maricris, they opened Lake Norman Tai Chi Center to serve North Mecklenburg, Iredell, and Cabarrus counties in North Carolina.
View all posts by Sifu Dale Guadagna →
Monkey Mind Active Lifestyle, Family